Can we get an AMEN?!

Here are a few quotes from the article that I had to share:


13 of season two, cast member Paul DelVecchio (Pauly D) enthusiastically nominated himself “Most Likely to Get Skin Cancer.” After hearing I had cancer at 19 this title disgusts me! If only he realized what all comes with what he is saying....
“As the series progressed over the years, displays of tanning behaviors grew in frequency along with the cast’s influence over viewers, to the point where the expression ‘Gym, Tan, Laundry’ became a national catchphrase."
Those who tan indoors are 74 percent more likely to develop potentially deadly melanoma than those who have never tanned indoors.
About 86 percent of melanoma and 90 percent of nonmelanoma skin cancers are associated with exposure to UV radiation from the sun.
"This is real – I’ve had patients as young as 25 die from melanoma.”- Senior Vice President of The Skin Cancer Foundation Deborah Sarnoff, MD, the dermatologist who staged the televised 2010 intervention with Jersey Shore’s cast
*These are quotes taken from the article
Posted by Samantha Hessel at 10:25 AM No comments: Links to this post

Wishing for a little more courage

Normally I like to workout at the gym early in the morning, before the birds are even up. Today I decided to go in the afternoon and I am reminded why I give up a little sleep for a peaceful workout. As I am stretching there are three young, probably freshman, girls sitting next to me. They begin talking about how one of them is so tan and the other two need to hit the tanning bed over winter break. Here I am cringing inside, wanting to scream at them, and thinking I need to say something. I really should say something, but what am I going to say? All the while there is this fear inside me. Needless to say, I was a coward and I didn't do it. I know I should have. I wish I would have. This was a perfect opportunity to share awareness. How is it that I can speak to hundreds of people about my story, but I can't walk up to three girls, share my story and my scar?
Posted by Samantha Hessel at 9:43 PM No comments: Links to this post

Prayers and Love are NEEDED!

Melanoma is a beast, one that nobody asks to enter their life, but it enters any way. I like to read blogs about others who are going through this journey called melanoma.Why? I am interested in their stories and hoping to make friendships with these people because they know what I am going through. I recently joined a facebook group made up of many wonderful, caring, supportive individuals and their families. Each one having their own story, but all aiming for one goal, to some day kick melanoma's a**. Why do I tell you all of this? I tell you because there are two messages that need to be heard. The first one is that melanoma has very unwelcomingly entered the lives of the Hayes family. Susan writes a blog about her 23 year old daughter's journey with melanoma. Susan's blog is one I have been reading and a friend I have made through facebook. This family needs all the prayers, love, positive vibes, and anything you can give them right now because melanoma is winning. It pains me to write this, but I know this message needs to be heard. Which leads to the second point. Jillian's story NEEDS to be heard. The young women and men of our society need to understand that skin cancer isn't always able to to be cut away. You may not think it is going to happen to you, but it can and does. I can't speak for Jillian, but my guess is she never thought this was going to happen to her. Please think of this young girl before you enter that cancer coffin or lay in the sun with baby oil smothering your body. No one wants to go on this journey, so reduce your chances of ever having to.

I encourage (really demand) that you read Susan's honest and emotional words that she has posted about Jillian's latest part of her journey. I hope it knocks the cold, hard reality of what melanoma can do to you. Loosing some one you love is one the absolute hardest things life can send your way. Yet, some how Susan is able to put this into words, to continue sharing Jillian's story because she knows how vital it is in the fight against melanoma. Be prepared with tissues because these words will bring you to tears. Check out the post here on Jillian's Journey with Melanoma- A Mother's Story.
Posted by Samantha Hessel at 10:26 AM 1 comment: Links to this post


Now that I have finally handed in my portfolio and only have one last paper to write before the end of the semester, I hope to have time to write on here more often. This week I have been feeling a little funky. The semester is winding down and reality is starting to hit that I will be pushed into the real world in six short months. Can anyone say AAAAHHH?! Next semester I will be student teaching and I will not be going to campus very often, which has left me feeling a little sad this week. Where have the last four years gone? I remember the excitement of heading off to college, getting there and being homesick, and scared out of my mind. These last four years have been a whirlwind and they say high school goes by quickly. As much as I didn't feel stress from this portfolio (it determines if I am accepted into student teaching), I have been stressed. On top of that yesterday marks the nine month anniversary of my uncle's passing. As hard as those first few months were, the last few weeks have been really hard again. Knowing he will not physically be present during the holidays this year is saddening. As much as I love this time of year and I do LOVE it (I was listening to Christmas music the day after Halloween and I like my house to look like Santa threw up), this year there is sadness in the air and I am feeling a little bah humbug. Along with that sadness one of my fellow melanoma warriors is in the fight for her life. Her mama bear writes the blog, Jillian's Journey with Melanoma. This beautiful young woman is battling stage 4 melanoma and has recently been told it will take a miracle for her to survive. I think about her and her family often, praying God is with them during this time. So I ask you my blog readers, send a little prayer for their family to make it through this difficult time. Also take a moment to sign Jillian's tan ban and help her reach her goal of 1,000! She is at 966 right now. Help her make that push to her goal!
Posted by Samantha Hessel at 5:15 PM No comments: Links to this post

As we begin the week of Thanksgiving I am reminded that I have so much to be thankful for. I have a great family and boyfriend, friends, a roof over my head, heat, food, clothes, the opportunity to get a higher education, and the pure, simple fact that I am here to celebrate it. As I feel every holiday reminds us of that, the in between is what gets us. The hussle and bussle of every day life, the little things that go wrong, etc. I love this time of year, which is evident by the fact I have been listening to Christmas music since the week of Halloween, but it also reminds me that I lost a loved one, who was dear to my heart a mere seven months ago and that no matter what he will not be here in the flesh to celebrate another Thanksgiving or Christmas with me. If feels like just yesterday I was spending Christmas with him last year and at the same time, like it was a million years ago. I was reflecting on this during my drive from school to home last week and I felt the sadness creep back into my heart. So often we take everything in life for granted. This bog is about my journey with melanoma, but in a broader light, my journey with cancer. His absence this holiday season reminds me that cancer is a beast and will take anyone. My hope is that you hold your loved ones closer this holiday season because we never know what the future holds. Happy Thanksgiving! Enjoy the Black Friday deals, I know I will be! :)
Posted by Samantha Hessel at 7:31 AM No comments: Links to this post 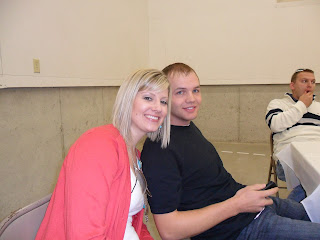 Happy Birthday to my best friend, the one who always has my back, the one who makes me laugh no matter what, the one who drives me nuts at times, but most importantly the love of my life that God gave me! I hope you have a fabulous birthday Nick! I love you more than you will ever know! <3
Posted by Samantha Hessel at 10:34 AM No comments: Links to this post

My momma always told me, "If you don't have anything good to say, don't say anything at all." I guess some people were never told that as a kid, sadly.  Lately, Chelsea Price, blogger at Adventures with My Enemy Melanoma, has gained a few haters for sharing her views and trying to be an advocate. This is not cool and my momma would have told you to be quiet. It takes a great amount of courage, hope, and faith to share your opinions, life, thoughts, fears, etc. for the entire world to see.

"I can't tell you how difficult it has been to write about my melanoma diagnosis on a public blog. To admit to the world that I've had severe self-confidence issues as a teenager and young adult. My family can read this, my friends can read this, some girl I went to elementary school but I haven't talked to in 12 years can read this, my boss can read this, and the list goes on and on. Not to imply that I regret blogging. I've made wonderful friends, experienced catharsis in sharing what I've held inside for too long, and motivated a few strangers to take better care of their skin."-Katie Wilkes, blogger of Pretty in Pale

Katie writes it perfectly. We share our story, risk being criticized, and hope that others will hear us and take our words to heart, because we don't want you to be US. So please stop the negativity, it will get us no where. Cancer feeds off of negativity so why would you bring that into melanoma survivor's lives after they have had to hear the words no one wants to hear. Instead, let us unite, with positivity, and scare the living daylights out of cancer. Support each other and spread awareness, doing something good instead of something negative!